Dead Boss is the new sitcom cowritten by and starring Sharon Horgan (Pulling, Annually Retentive, Todd Margaret), and is a darkish comedy with quite a cheerful tone.
The first episode opens in court, after Helen Stephens (Horgan) has just been found guilty of murdering her boss. Some quick exposition lets the audience in on the plot, and the subtext of what’s really going on, as she’s sentenced and led away. 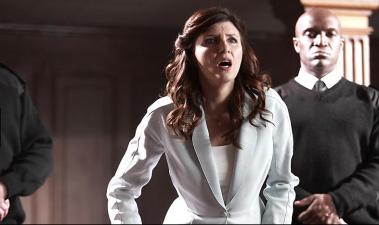 Dead Boss is silly enough to make light of the dark subject (complete with cheerfully upbeat narration and music), but dark enough that interactions with Top Dog and Yvonne (leaders of the prison gang) have menace to them.
There’s a strong story running through the comedy, whereas Life’s Too Short, for instance, is more a series of comic incidents with a plot loosely connecting them. With the process of appeals, and the murder mystery, there’s a strong story here as well as the comic incidents.

But of course, comedies rely on the quality of their jokes, and Dead Boss is packed with good lines, many of them laugh out loud and mostly character based. Some of the jokes are a bit filthy (Horgan was one of the writers on Monkey Dust) but Dead Boss doesn’t reach for the cheap shocks.

Though you may expect a writer-star to give themselves the best lines, there’s a range of strong characters here – Helen’s meek, arsonist cellmate, her cheerfully indifferent sister, Jennifer Saunders as The Governor – almost as selfishly detached and delusional as Absolutely Fabulous‘ Eddy Monsoon – and a cheerfully incompetent lawyer, who announces that ‘Until I get paid, my work will be half-arsed. At best.’

The best comparison I can make on Dead Boss‘ style is with 30 Rock.
I first became aware of 30 Rock by repuation, a fair while before seeing an episode. With it being hyped up so much, I expected something very funny and emotionally and tonally realistic, like Frasier and Cheers at their peaks. In fact, it’s more like Airplane – very funny, but in a silly and inconsequential way, with characters that are quite over the top. Dead Boss is the same.
Dead Boss has the kind of world that isn’t realistic, (and certainly wouldn’t be mistaken for a documentary as The Office apparently was) but has plenty of funny and compelling characters. None of the characters is a Tracy Jordan or Jack Donaghy, but there are a few (Aisling Bea’s and Edward Hogg’s characters in particular) who are just below that level in quality.

Dead Boss is available on BBC iPlayer, episode 3 is on BBC Three at 10:30 Thursday.